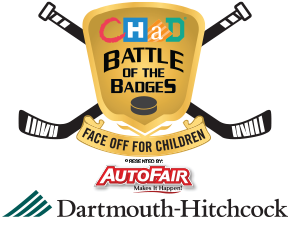 ***There has been a major change to the Battle of The Badges event due to precautions over the COVID-19 outbreak. Read the official statement here.***

The 13th Annual CHaD Battle of the Badges Hockey Championship is a big hockey game between New Hampshire’s Police and Fire Departments with all proceeds going to an amazing cause. The game goes down March 13th at 7pm in Manchester, NH at the SNHU Arena.

The proceeds will be used to help kids at the Children’s Hospital at Dartmouth Hitchcock with critical services such as support when they are in pediatric intensive care and management of chronic illnesses. Funds also provide for family support services that are so important to the well-being of kids. To learn more about the impact your donation can have for ChaD kids, go to CHADKIDS.org

Garrett stopped by the Magic Morning Show today and told us all about the game. Check out the interview below!

If you would like to learn more about the CHaD Battle of the Badges, and how to buy tickets you can go to CHADHOCKEY.ORG